Normally, in my life as I've known it so far, this week would have been tech week. Tonight probably would have been my final dress rehearsal since Friday is my first performance. But this hasn't been like other gigs I've had, so instead of getting all stressed during tech week and worrying about the whole lead up to the performance, this is what I've been doing instead. 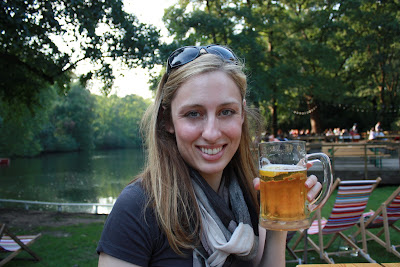 Here I am at a Beer Garden next to the zoo in Tiergarten, the big central park of Berlin. I'm drinking this weird half beer, half lemonade concoction. 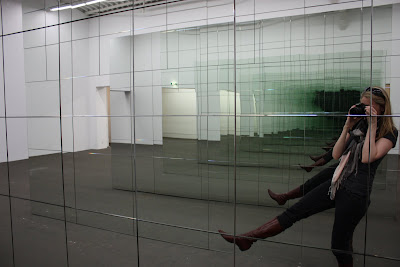 This is me having fun inside one of the art installations at the Hamburger Bahnhof, Berlin's contemporary art museum housed in a former train station.

Oh, I've been practicing on my own, singing through the role every so often to keep it in my voice, and going through the staging (in my head) as I walk down the street, and (for reals) in my living room. But I know myself, and the more I can psychologically convince myself that this isn't some big premiere, or debut, but just, let's say, the third or fourth performance in a run of Barber of Seville's, the better off I'll be. So I'm trying to live my life, keep myself normalized, not psych myself out, and keep myself both mentally and physicaly healthy and happy. So far it's working, and after a day of museum hopping and beer guzzling (okay, not really - I only drank half of that lemony thing), I'm ready to get into my bed and sleep in until tomorrow morning. And I should be able to sleep in, because the other project I embarked upon this week was covering the floor to ceiling windows in my bedroom with aluminum foil to keep out the light. I made a joke on facebook that I would either get plenty of sleep or be roasted like a turkey. So far no cranberries have been served alongside my legs, so I'm sticking with the plan.
Posted by sestissimo at 2:00 PM

Keep on having fun- I'm glad you decided not to cut your hair! Hope everything is great this weekend- and all the mean nonclapping whisper yellers are at a different show!

I don't care what anyone tells you -- Bier + cola is NOT a good combination. A Radler is about as far as you should venture into the wild world of German beer-cocktails!

I'm so happy you're enjoying yourself whilst preparing for this opening. This looks to be a wonderful way to use all that time on your hands. :) I was thinking of you tonight in our Final Dress and cannot wait to hear all about your show! Woo hoo!

Isn't that what they call a "shandy" in Britain? Personally, I don't believe ANY fruit belongs in beer...but I'm a purist...