Earlier this afternoon, when I was speaking to my parents on the phone and I told my mother that I was going to take a 4 hour bike tour of Berlin, she said "YOU are taking a BIKE TOUR? When was the last time you were even on a bike?" And she had a point. It was probably when I was about 9 years old.

Nonetheless, I just had this feeling that I really wanted to take a bike tour of Berlin, because it is such a friendly city for bicyclists, and because I wanted to get my bearings and figure out where things were in relation to one another, and learn some history about all the famous monuments I've just been staring at dumbly and trying (mostly unsuccessfully) to take arty photos of with my new camera.

Well, let me tell you, not only was it the best thing I've done in Berlin so far, but it was seriously one of the most fun things I've done in a really long time, period. Our tour guide was this funny, bright british guy named Tom, who was full of energy, humor, and a lot of really interesting information. The thing that amazed me initially about this tour was the fact that here we had 20 tourists on bicycles, riding through traffic and pedestrians, and later on in the evening - IN THE DARK - and they didn't so much as have us sign a waiver. In fact, we didn't even pay them until we returned from the tour, which lasted closer to 5 hours. In the litigious U.S., such a relaxed attitude would be impossible. But here in Berlin, they just take it easy.

Anyway, if you are coming to Berlin for even just a few days, run, don't walk to Fat Tire Bicycle tours and take one of these fascinating fun tours. The first thing about it that was just so fun for me was the being on a bike part. Since I haven't ridden a bike since I was a kid, there was something very magical and freeing about gliding around on two wheels. I felt like yelling "Wheeeeeeeeeeeeeee!!!!!!" a lot, but I restrained myself. I did however, have several very close calls where I almost either had collisions or accidents because of my lack of riding skills. The first time, ironically, we were pulling into the square next to the Staatsoper, and when I was pedaling in between two columns, I misjudged and almost went flying onto the cobblestone street. That would have been convenient; "Tom, be a dear and run inside the stage door there and tell them I won't be able to sing on Friday because I've broken my leg." The second time, I sort of half collided wheels with the tour-guide and veered off into the grass on a down hill slope heading right into the river. When that happened it was dark, which would have added to the problems had I actually fallen into the river, but luckily again, I was able to recover. But seriously, how do they operate those tours every day and not have people falling off their bikes and into rivers?? Or am I just the most un-coordinated bike rider to ever grace the streets of Berlin?

The tour started at the East German tv tower, and went through many sights and historical landmarks, including Unter den Linden, Checkpoint Charlie, parts of the remainder of the Berlin Wall, Brandenburg Gate, the Reichstag, and the Tiergarten. In fact, we biked from the east side through the Tiergarten to a Beer Garden where we ate bratwurst and drank beer, then, remarkably, got back on our bikes in the dark and sped back through the tiergarten to finish up the tour. We rode along the river and over bridges, and stopped at all the important points, where Tom gave us the historical context of what we were looking at. I honestly almost didn't go because I thought I would feel stupid being possibly the only person who was there all by myself, but it turned out to be the perfect thing for a solo traveler to do because I was surrounded by nice, friendly, english speaking people and everyone ended up getting to know each other and bonding over the spokes of our matching orange and blue bicycles. It was a really satisfying and fun day, and now I'm going to fall into bed happy and exhausted. 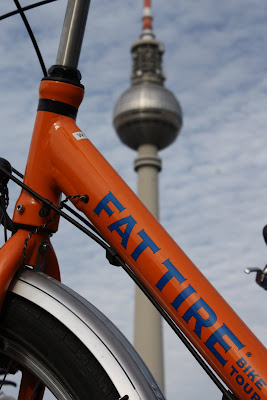 Posted by sestissimo at 1:19 PM

Great way to see the city, sounds like fun, is it Octoberfest there yet? A guy in my gym told me that it starts in September in Germany. Lots of beer drinking opportunities.

I watched your last Barbiere performance at Berliner Staatsoper on Monday.

There is no reason for doubts. It was a really funny performance with
good singing by the complete cast, even the ill announced baritone.

Your mezzo coloratura in your entrance aria was different from that I heart until now. Very lovely and interesting.

Respect and all the best for your carriere.

Hope to hear you again in Berlin next season.