I finished my last day of recording on Friday afternoon and flew back to Innsbruck (via Munich) on Friday evening. I went right back into staging rehearsals here on Saturday, and today have a much needed day off. I needed a couple of days to gather my thoughts about the recording process before writing a post on it anyway. And now I'm sitting in my favorite little internet bar/cafe, drinking a big beer and gathering my thoughts about everything that happened in the past week.

As you may have gleaned from my last blog post, which I wrote on day 2 of the process (which was a total of 2 full days and 2 half days) I was feeling a little stressed at the beginning of the week. The day I arrived we recorded just some recits, which, while they require concentration, don't require a lot of intense singing. The second day, we started by recording all of the ensemble pieces, which have me singing in my very high passaggio. We repeated all of them many many times, and my voice got tired. Then, at the end of that morning session, we recorded my first solo singing moment, which was a quartet that has a long coloratura phrase at the end for me. As I mentioned, I couldn't get it to come out right, no matter how many times we repeated it. My voice was too tired, I hadn't slept well the night before, and I was feeling under pressure (we re-recorded that particular section on the last day successfully when I was more rested). Somehow, however, I managed to gather my strength and resources and record my first aria after the lunch break. The main reason I was able to do this was because I figured out that you can sing very lightly when making a recording of an aria like that one, and I think I managed to do it some justice.

I want to take a moment here to describe the recording process for those of you who might wonder what happens during a studio recording (I certainly had no idea prior to this experience). In this case, we tended to have a system that went something like this: With the recits, we would rehearse them once with all the continuo players, then record them once and go into the booth immediately afterwards and listen, with the conductor, the producer, and the diction coach giving us notes while we listened. Then we would go back out into the studio and do them as many times as it took to get everything onto the recording in a manner that pleased the Maestro, the producer, the singers, and the players. Arias were much the same; we would perform them once straight through and then go listen, taking down notes. Then we would often do the dacapo arias in sections, A, B, A - repeating the sections as necessary, and repeating small sections as necessary. In a typical session with one of the arias, the notes from the producer (who was listening very carefully in the booth) would be something like this; "Jennifer: in measure 42, the last two sixteenth notes are a little flat, and in measure 43, you are not quite with the oboes. Also, in measure 35, I can't understand the word "sdegno" and you need to make a clearer double D in the word "freddo." Let's take that section again" So you would repeat that section, and try to make sure you managed all the corrections. 5 minute sections of recitative typically took an hour or so to record and arias took between an hour and an hour and a half. It is exhausting not just vocally, but also mentally to be so focused on tiny details, but it's also incredibly rewarding to be able to sing each phrase exactly how you dream you could sing it on your best day.

So, after the second day, things became considerably easier for me. I recorded two arias and some recit on day 3, and more recit plus my big vengeance aria on day 4. By then I had figured out how to work the microphone, how much I needed to sing, and what things sounded good and what things didn't. Plus I started to feel much less stressed about the corrections when I realized that everyone was getting essentially the same types of corrections, and these are just the natural tendencies of the human voice. In real life, I don't often have people telling me that I'm singing flat or sharp, but I had to accept that when you are a mere six inches from a very sensitive microphone, you have to be extraordinarily vigilant about intonation, so I was. When we finally reached my final aria (which is the one from the clip I posted on the blog from youtube from the production), and which is Nerone's only chance to sing full out, balls the the walls, I actually started to have some fun. I was still trying to be hyper conscious about in tune sixteenth notes, but I was actually enjoying rocking out with this amazing orchestra and experiencing a real symbiosis with the players. There is a fantastic oboe obbligato during that aria, and the amazing oboist was standing right next to me on the next mike, and I felt like we were really synching up in a way that's impossible in the middle of a staged performance. I just let go and let it rip. Finally, I found myself smiling between takes.

Like many experiences, the first time is probably the most difficult, but also the most memorable. Your learning curve is steep, but so is your sense of accomplishment when you start to figure things out. And while the final result won't be available for quite awhile, I'm sitting here, drinking my beer, and celebrating a milestone in my life and my career. Cheers! 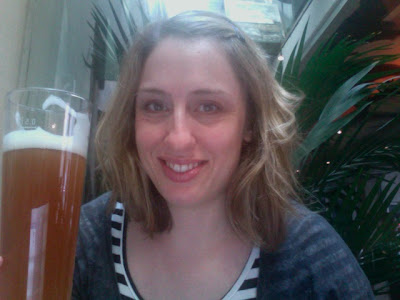 Posted by sestissimo at 9:43 AM

OK, we'll be waiting for the Harmonia Mundi relaease :)

Thank you so much for this. I am so glad to know that there is such care in the minutiae of a project like this, especially under such a respected leader and prestigious label. This is an invaluable and candid description of a process which so few of us will ever get to experience. But if I ever do, god-willing, I know what to expect.

I can't wait to hear this recording. Please come to SF to sing. Also, love the beer glass almost as tall as you are.

Jenny,
I'm very proud of you. That first studio recording is such a different experience. It is soooooo different than live performances being recorded. i cannot wait to get it and i know it will be HUGE success for you!
All best,
Danny

Jen, please do let us know about the approximate release date of your Agrippina.

Thank you all for your lovely comments and support. I don't know the release date, but when I find out, you all will be the first to know! Also, Opera Cake, thank you for sending me that review - I would have never seen it otherwise! And to be compared to the divine Malena Ehrman is nothing short of miraculous!!

Whoa! - That IS a big beer! (Don't you know you should NEVER record Handel and drink!)

Thanks for explaining your experience! I learned so much from hearing what you had to say about the recording process and everything. I am looking forward to the release. Congrats! :)

I get such a kick from your blog. My kid's a soprano yearning for a conservatory or uni/vocal performance spot next year. Your blog is a trove of great stuff about what a singer really goes through. Keep it coming - and the videos are a fine addition.