Talking interspersed with some singing

Yesterday, I was on the phone with my best friend Georgia at about 5:30 in the afternoon, and we had been chatting for awhile about what we had been up to that day before I casually mentioned, "You, know, I should probably think about warming up soon because I have to leave for an orchestra rehearsal in like 40 minutes." She laughed and said something about how relaxed I had been on this gig about singing, and how I had been focused on a lot of other stuff - like eating and making videos. And it's true - I have been having a very entertaining time here in Portland, and haven't been feeling a lot of stress. I don't want to say this out loud for fear of superstitiously jinxing myself, but I will anyway; All the problems I had been having with Rosina in the past seem to be finished. I haven't had one cack or blip in rehearsal that has caused me to worry, plus I've come to a place of acceptance with myself that acknowledges that even if every note isn't as perfect as I want it to be, I can still accept the contents of the whole with much more peace and serenity than before. And I know for a fact that this attitude serves me well, because when I am relaxed and not all uptight about every note, I sing MUCH better. So, I guess it's safe to say that Portland agrees with me.

On Wednesday, I had a day off from rehearsal, but I managed to sneak in a coaching of The Golden Ticket, which seems to be coming along. It's one of those scores that sounds very accessible to the person listening to it, but it has a lot of tricky rhythmic sections, where the time signature goes from 5/8 to 12/8 and then suddenly is in like 245/872 or something. But I feel confident that I will be ready for the first rehearsal on May 17th. After my coaching, I participated as a panelist in the OperaNow! podcast, which streamed live, so I was inordinately nervous for the first 15 minutes we were podcasting. I have heard myself in certain live interviews, and I always think I either sound super hyper, or like I'm stoned because I'm trying too hard not to sound hyper. But I listened to the podcast, since it has now been posted on the OperaNow! website (it's the most recent - #105) and on itunes, and I wasn't too horrified by myself. And I was very impressed with Oliver and Michael, the hosts. They manage to be both hilarious and informative, and I think their take on opera does a lot to demystify it, and get rid of the typical stuffiness. In the last 30 minutes of the podcast, we talked a lot about regional American opera, (as the result of discussing this article in the Orange County register about the demise of Opera Pacific), a topic I think we should all be considering for the future of the art form in this country. If you listen to the podcast, please leave reviews for them on itunes, because it helps them to get the word out, and what they're doing is unique and important - we need MORE stuff like this to keep opera alive and kicking.

And now, for some rehearsal photos that I took during one of our last rehearsals before we went to the stage. Except the photo of me, which is courtesy of my darling Count Almaviva, Nick Phan. The photos, from top to bottom are; Chris Mattaliano, (the director) Steven Condy and Arthur Woodley (Bartolo and Basilio), Daniel Belcher and Nick Phan (Figaro and Almaviva), Nick, Danny, me, Danny. 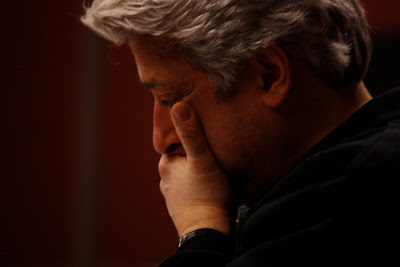 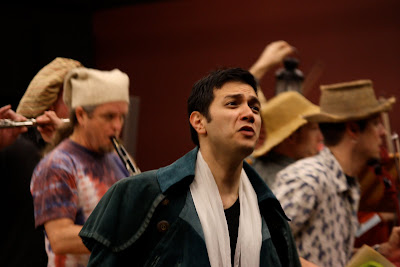 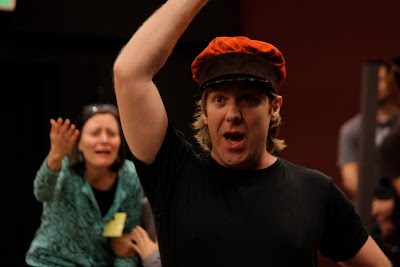 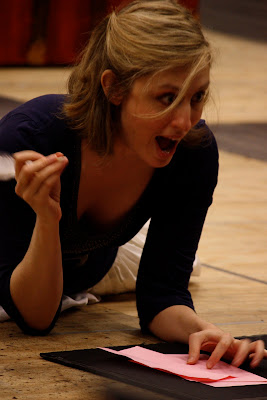 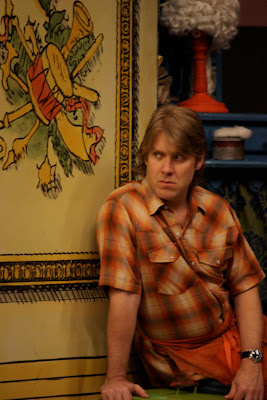 I don't normally read any emails from Portland Opera even though my wife Shannon and I have season tickets. Whatever made me open its content I can't say but the reward was worth it. You took me on a enjoyable 45 minute roller coaster ride through these past few days that you have been in Portland and I feel much more connected to the company and the upcoming performance because of your efforts. The video's were really fun to watch, good job! Thank you so much and see you soon.

I love these pictures. The one of Chris and the one of you are really lovely and the other ones of the guys show their funny personalities. Good photos!!!!

You sounded fantastic on the podcast, actually--not hyper or stoned at all. :)