I arrived in Berlin this morning absolutely wrecked from the 8 hour overnight flight on which I didn't sleep a wink. I cannot sleep on planes unless I have had a previously exhaustive schedule (like the time I flew back to New York from Japan, and was only able to acclimate about half way to the time difference when 5 days later I had to fly to Spain. I slept like a baby on that flight). Oh, and don't even get me started on the whole charging for checked bags business. Delta is now charging $50 for the second checked bag on international flights. Don't they know that I have my packing down to a science where I manage to fit my entire life into two suitcases, both of which must weigh less than 50 pounds? Not to mention the fact the Delta terminal at JFK is a NIGHTMARE beyond words, and no matter what time of day it is, there is always someone about to get into a fistfight with one of the Delta employees. I myself have nearly come to fisticuffs more than once. But that's another blog entry.

I arrived in Berlin at 8:40 AM and was just praying that my hotel was going to let me check in early because after flying all night and not sleeping, my eyeballs feel like there is a layer of sandpaper between them and my eye sockets. The first thing I noticed about Tegel airport - the main airport of Berlin - was that it seemed like it was about the size of the airport in Columbus, OH. It is seriously TEENY! I read in one my books that they are building a really big airport set to open in 2011, and I can see why! The first really stupid thing I did was I wandered outside in a daze to try to find a taxi, and I actually started to get into this regular guy's car who was just waiting there to pick his son up. I think I had read something about how the taxis in Berlin are Mercedes, and in my sleep deprived deliriousness, it didn't occur to me that if there is no sign on top the taxi that says TAXI, it's probably just, oh, I don't know, a CAR. I mumbled something to him in totally incoherent german, and finally I just said in english "are you a taxi?" and he responded to me in perfect english, "No! I'm just waiting to pick up my son. The taxis are over there, with the signs on top of them that say taxi." He pointed in another direction and I felt like a total doofus. Poor guy, just minding his business at the airport, when some blond american starts telling him to open his trunk so she can put her suitcases inside. Oy.

I arrived at the hotel at around 9:45 AM and tried to be as friendly as possible so the hotel clerk would take pity on me, but she didn't seem all that interested in the fact that I was sleepy and told me to leave my bags and come back later, at check-in time. I managed to kill about an hour, but eventually I was so miserable that I just came back to the lobby and sat on the couch in front of the desk looking up at her miserably every few minutes, until she finally probably decided she couldn't stand looking at me any more and gave me a room. I planned to take a two hour nap, but it turned into four. I was so sleepy that at one point someone knocked at my door, and I thought "I should call out to tell them this room is occupied, but I'm too tired. They'll just see my lying here when they come in and go away." Luckily I think they must have been knocking on the door next door because I don't believe anyone actually came inside. Although, I felt like someone had slipped me a roofie I was so tired, so they might have come in and napped beside me and I didn't notice.

When I finally woke up, I showered and decided to get my bearings. I walked over to the Staatsoper, and was delighted to see that the orchestra was performing an outdoor concert in the plaza next to the theater with Daniel Barenboim conducting! 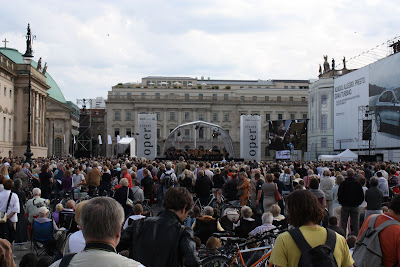 People always ask me "are you getting excited?" when I'm about to go to a new place for a gig. The truth is I rarely feel excited until I get there, and it always hits me at different points. Today it was when I started to near the theater and I heard the music playing and realized what was happening, and then simultaneously walked by a sign with my name on it. Then I started to get really excited. It's real!!! My name's on the sign!!!!

I walked to the apartment I will be renting for the month, although I'm in a hotel for the first two nights because the apartment wasn't vacant until September 1st. A lot of people ask me about how housing works when you go on a gig like this, so let me just explain in case you don't know. Most opera companies in the U.S, with the exception of a few big ones, provide housing for their singers. It seems like in general, the higher the fee the company pays, the less likely it is that they will house you. In europe, you always find your own housing. You figure it all out yourself and just arrive at the first day of rehearsal. Last year when I sang in Italy it was my first gig in Europe, and I didn't even know where the theater was, and I certainly didn't know what to do when I got there. But at least with the Staatsoper I was here for my audition so I know basically where I need to go. Sorta.

My observations about Berlin will have to be saved for another blog entry when I'm more coherent, rested, and better able to form opinions. For now I'll just say that it has an incredibly nice, relaxed vibe that I'm really liking. It's astounding to think that all of East Berlin has become what it is now just since 1989! I will also upload some photos later, but right now my internet time is about to expire, and I really have to go out in search of water. I must HYDRATE for tomorrow's first rehearsal! Guten Abend! 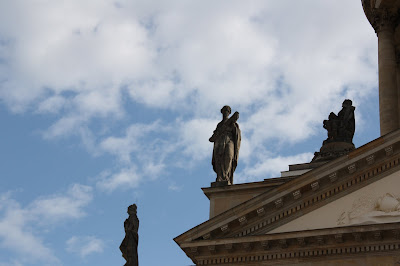 i feel your delta pain...and the not sleeping on the entire flight over. so. not. cool.
Yay Berlin! See you soon :)

I love Berlin. If you are looking for a quick place to eat, the top floor of the KDW department store has an amazing food court with lots of different food stations. You can sit at counters and watch your food being prepared. It's great if you are a solo diner. Have fun!

I just wanted you to know that your blog makes my day. I stumbled upon it a few days ago and I've been reading your old posts. You're hysterical and I love it so keep blogging!!

Also, it's nice to know that I'm not the only one who gets in these awkward foreign-language, air-port, music-learning, piano-hunting situations. I'm younger and just getting into this whole crazy opera world so it's nice to read (in detail!) what it's like to be a professional. At least I know what I'm getting myself into. ;)

From one mezzo to another,
~Kim