Wow - sorry for how long it's been since I've written an entry. I've been in Miami to do a production of La Cenerentola with Florida Grand Opera since January 1st, and I'm just now getting around to writing a post about it. But I have a few excuses for my lack of posts!

First of all, FGO is one of the companies that require each artist to find his or her own housing arrangement, and since my friend Scott, who directed the production of Barber I did at Opera Pacific a few months back was also directing this production, we decided to save a few clams and get a two bedroom apartment together. It's actually really fun living with somebody while on the road, because usually I spend A LOT of alone time - more than I really would like to - and this way, when we get home from rehearsal at night, I actually have somebody to talk to about the fact that I didn't like the way I sang that scene today, or wasn't it funny when so-and-so made that joke today, etc. But this also means that I'm never really alone, and when I'm alone and pensive is when I tend to come up with ideas for what to write about on my blog. Add to that the fact that this cast is particularly social and friendly, and that I've been spending a lot of time with the other singers, and this job has been anything but solitary. Which is great for me - but bad for the blogging.

So let me fill you in. I arrived January 1st with no voice whatsoever. I sang a concert on New Year's Eve, but it made me completely lose my voice because I was already battling with laryngitis. I arrived to the first musical rehearsal and couldn't even really speak, so I sat and listened while the other Cenerentola (thank goodness there are two of us) sang the musical rehearsal. I both loved and hated not being able to sing for that first rehearsal. I loved just listening to this EXCELLENT cast (it really is one of the best groups I've had the pleasure of singing with in awhile) knowing that I would get to sing with them all eventually. But I also hated not being able to make the music myself and "show my stuff." Luckily after only a few days, my voice returned and I was able to start singing in the rehearsals.

The rehearsal process has been mostly fun, although a tiny bit stressful at times because only the Cenerentolas are double cast, so if we both want to rehearse, everybody else has to do everything twice. I'm one of those people who loves rehearsing -it's definitely one of my favorite parts of the job. I love making the music and exploring the drama with absolutely no pressure to be perfect (as in a performance) and repeating the scenes many times to find the endless dramatic and musical possibilities. With two Cinderellas, I find I don't quite make it to that point of comfortable exploration as often as I would like. But the positive is that I actually get to see what things look like from the outside, and I happen to be double cast with a brilliant and musical singer who I can learn things from by listening and watching. And since this is my sixth Cenerentola, I should probably be able to do the performances on no rehearsals and blindfolded.

Oh, and it would be really ridiculous if I didn't mention the fact that I'm in Florida in January and it's EIGHTY DEGREES AND SUNNY outside! There are three singers from Montreal in the cast, and we keep pulling out my iphone and opening the weather application, just to look at the fact that it's 16 degrees in Montreal, 26 in New York, and 78 here - all in the same time zone! I was swimming in the blue-green ocean with one of the singers, and we both looked at each other at the same time and said "Can you believe we're here for work?"

Besides being an amazing tenor, Frédéric Antoun (my Prince Ramiro) is a great photographer, and he took this photo of Scott and I standing on his balcony on our first day off. I wouldn't recommend looking at this photo if you are about to go outside and slip and fall on a patch of ice, or if you have your feet in a bucket of warm water because it's so frigging cold outside. This is right before we all headed down to the beach to soak up the sun for several hours. I'm sorry!!! I really am!! Don't hate me!! 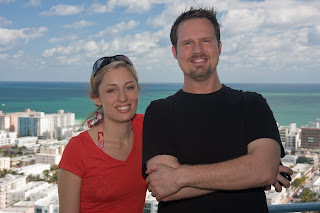 Posted by sestissimo at 7:28 PM