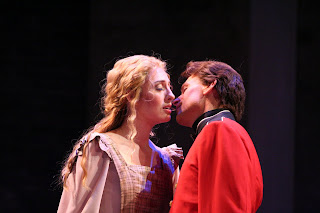 I had a hilarious conversation with a friend of mine on the phone the other night about what it's like to have to kiss someone onstage. We both agreed that it can be totally no big deal or really awkward depending on both people and the situation, and sometimes it can be pretty funny. First of all, there's the awkwardness of deciding when to first start actually kissing each other -because you usually have a couple of weeks of rehearsal in the room before you get to the stage. So, do you start kissing at the very first rehearsal and just get over whatever weirdness there might be, or do you fake kiss (or hug) until you get onto the stage and it starts to feel more like a performance? I' think it's easier to kiss from the first day so it's totally not an issue by the time you get to the stage. But then, how do I tell my romantic co-star that I want to kiss from the first day without seeming like I want to kiss them in real life? Usually I don't say anything and just go with the flow.

Then there's the situation where you are kissing each other and holding it until the blackout. When the lights are on you and you're onstage, you are in your characters, so it's no big deal. But when the lights go out, you're suddenly yourselves again, so how do you extricate yourself from kissing without it being weird? I've noticed I almost always do the same thing (which I'm scared to write about because I'm sure Brian, who is currently playing opposite me, will read this and he'll need to make fun of me when I unconsciously do it in our next performance). I always pat the guy (or girl if I'm playing a boy) on the back like "hey champ, good job there" as soon as the lights go off. Have you ever seen two straight guys hug and do the "straight guy back pat"? That's what I do. I'm surprised I don't ruffle their hair or punch them on the arm. It's my way of trying to normalize a non-normal situation I guess.

I've also had friends who told me that they worked with directors who told them "you need more heat - go make-out/ roll around in bed and get yourselves used to each other." It's something I could see theater people doing, but it would probably really freak most opera singers out. It's funny - theater people don't really see romantic scenes as particularly unusual - imagine what they have to do with each other in movies - but most opera singers I know are squeamish if they have to do anything too involved. I did one show (Lysistrata) where I had to climb all over a baritone, while both of us were pretty scantily clad, and he was wearing a fake erection that kept poking me and threatening to rip my costume (I'm not making this up - Lysistrata is about the women refusing to have sex with the men until they stop fighting war, so the whole second act has the men wearing these fake metal erections under their costumes). But that's nothing compared to some more modern operas I've seen where they have to actually simulate sex. Yikes! That would totally freak me out.

But the best kissing on stage story came from my friend who will remain anonymous, but who gave me permission to tell this story. He was a young guy in his high school musical, and he had never actually kissed a real live girl before. They came to the moment in rehearsal that he was supposed to kiss his leading lady, and the director, perhaps sensing his lack of experience, said to the two high schoolers, "You guys need to go practice kissing." My friend said it was probably the best day of his life, as they dutifully marched down the hall, shooing away the girl's little sister, so they could go find a classroom and "practice". After they spent five minutes making out, they went back to rehearsal, both a little, ahem, wiser. Even though it is totally not okay to ask two high schoolers to do something like that, the thought of this innocent young guy receiving his first kiss thanks to a particularly liberal theater director made me laugh hysterically. No wonder he became a performer! 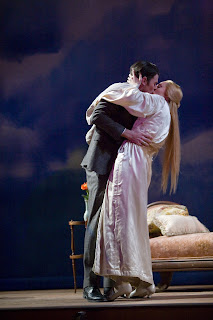 (top photo is with Brian Downen in Cenerentola and bottom photo is with Keith Phares in Elmer Gantry)
Posted by sestissimo at 4:34 PM

I loved this blog, so interesting, something one never thinks about, but it could be really uncomfortable or lots of fun depending on the circumstances.

But.. you forgot to mention whether there is TONGUE involved. There's what makes the difference! Gluing one's lips to another's and making it *seem* like you are "French" kissing, is the normal thing singers usually do (Unless, ahem, you are kissing your Ex, or a current fling)...
I know of a certain famous tenor who "accidently" slipped the tongue to his Soprano at the MET... and she was SOooo mad... at intermission she yelled at him, he yelled back... to this day they don't speak to each other (nor kiss!) :p

Kissing my counterpart on stage worked for me.
Most of the time, I wait until the show opens. But the director insisted that there needed to be a familiar chemistry between us. Now we are engaged!!!
Funny how that works. Great Blog entry Sestissimo

In my first mainstage operatic role, I played Zerlina with a slightly older Masetto. Our director wanted us to make our entrance and "mack" right away down center stage. I uncomfortably giggled and we pretended for the first time through the scene. The second time through the scene he went for it without warning and with gusto! Apparently the surprised look on my face was priceless. The director shouted "Yes! That look is perfect!" Of course, the honest shock proved hard to repeat. ;)

Yes! I love hearing all these kissing stories - more please! Everyone has one!

After these storys I want became an opera singer.
A kiss to Jenny and another kiss to Pat!

Hilarious. Probably good that I read this after closing. I do remember the back pat thing. The first time you did it, I wondered if it was some kind of subtle "OK- the lights are off, you can let go now." I guess it confirms that the back pat is the great non-romance signifier; whether it be the man on man de-gaying of a hug or opera colleagues extricating themselves before retreating to opposite sides of the stage for bows.

Jenny,
I love this blog! It's so honest, insightful, funny and down to earth! We are still rooting for you home town girl.

Jenny,
Your blog is wonderful. I am thinking about you and wishing you the best in Berlin!

Quick kissing story. I was doing a show that had 16 performances in a 3 week run. In this show I had a VERY LONG passionate kiss with a baritone that was close friends with me and my husband. It was weird at first in rehearsals, but by the time we hit the 10th performance it was so "normal" for our characters/us that by mistake we both opened our mouths and a tongue crept in there. When it happened we both froze for a second and then realized we were still on stage so we continued on with the kiss (closed mouth) with extra head movement on my part because I was so nervous about what just happened...It was like I was trying to speed up the kiss. Ha! We laughed so hard back stage and still laugh about it now.

Now I shall really work hard with my lessons if I want to kiss a hot guy on stage soon (wouldn't mind kissing Gilfry or Hvorostovsky... *blush*).

Though I never sung a bigger operatic role on stage, I had a funny experience :)

We were doing a sketch for a charity performance where I had to kiss my best friend (my part being the frustrated wife, he was the supposedly innocent high-school-pupil.)

Additional fact: He is gay; so presumably he got his first kiss from a girl that way -- I never asked, though :)

We were feeling really weird, because the thought to make out had never crossed our minds.


His comment after the performance -- and a very convincing kiss -- was:

"Oh my, people will assume now that I am heterosexual..."