I am definitely something of a masochist. Today we were staging the quintet and quartet in the second act of the opera. This is the very comedic scene where Don Basilio enters only to be shoved out by the other 4 principals, and then Bartolo discovers that the Count is in disguise and romancing Rosina while Figaro is trying to shave him, and the 4 of us run around the stage in craziness and mayhem. It is always a very physical scene with lots of running and usually shaving cream flies everywhere and bowls end up on heads, while wigs come off. We were figuring out the traffic patterns of some of the chases, and I looked up at the spiral staircase on stage left. "Gee," I remarked, "it's too bad we can't find a way to have somebody hanging off the staircase in this scene." It was really just a comment that I didn't expect anyone to take seriously, but the director was intrigued. "How could we fit that in?" he wondered.

So, me and my pratfall-loving self started pulling myself up onto the railings and seeing how I could hang off the thing. We tried many different incarnations, but then discovered that if I grabbed onto one of the stairs and swung forward, it looked pretty funny. We decided that if Bartolo was chasing me and I used a stair to swing myself out of the way to escape, it might work. So after several botched attempts, we got the maneuver to work. We ran the scene several times, and I was so excited that I was getting to act like a monkey that I was ignoring the fact that my arms really started to hurt. It was like doing a bunch of pull ups, and then doing a few more. Now my shoulders are killing me, my arms feel like someone tried to pull them off, and my hands have a bunch of callouses on them. BUT it's worth it because I get to do this: 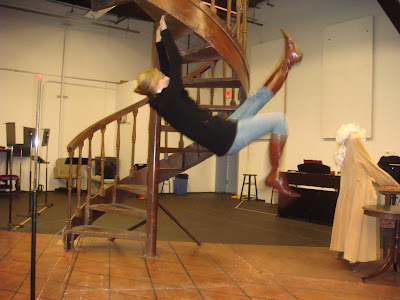 What is WRONG with me? Why do I think that being on a stage in an opera is the same thing as being on the playground in the 4th grade? But unlike 4th grade, I have GOT to remember to stretch first.
Posted by sestissimo at 8:25 PM

oh lord, this is toooo funny, it made me belly laugh.

I love it! And hot boots!

That is awesome and looks like so much fun! I can understand your enthusiasm.